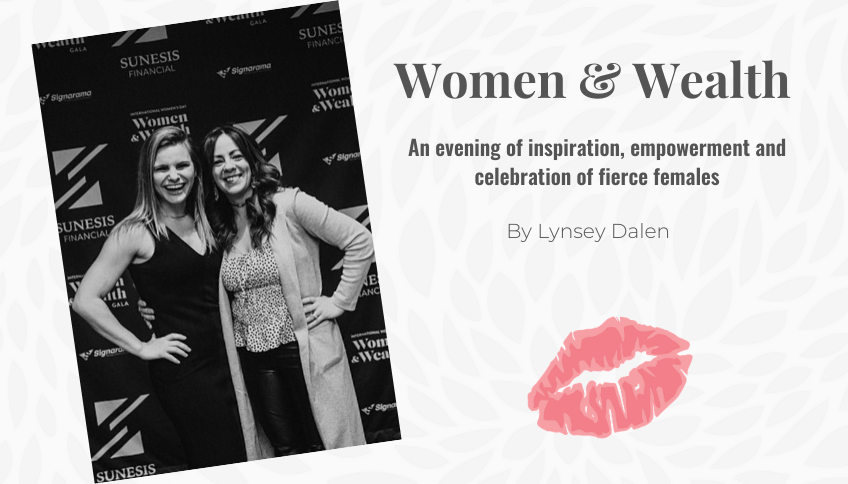 I love a good gala…

and last Saturday, I had the extreme pleasure of attending the Women & Wealth Gala for the second year in Edmonton and it could not have been a more magical night! The team behind this event pulled off a stunning evening and no attention to detail was spared. Everything from the decor, to the food, to the speakers, to the prizing and swag was AH-mazing and my girl Tawni and I were on top of the world!

We decided one afternoon while we were having a wine date at Earls that we needed to attend this event.

We’ve been friends for years now but have never taken the opportunity for a girls weekend so this sounded like the perfect chance. We’re both huge fans of Michele Romanow and after attending this gala last year to see the brilliant and beautiful Jillian Harris & Jess Tetu, I knew this was going to be something special. So we bought the VIP tickets and booked the weekend into our calendars.

We drove down on Friday morning which was a mission because the roads were covered in snow and the wind was blowing us around quite a bit. But, like the professional Northern Alberta girl that I am, I was prepared with all the winter essentials and I knew how to adapt to the road conditions. We just took our time and arrived alive!

When we got there, we crushed out a few errands that evening before we posted up in the lounge at the Matrix Hotel.

While we were enjoying some local craft beers, we got chatting with a very interesting, very stylish and petite young lady named Kelsi. We discovered that she owns a jewelry line called Brass & Unity and that she’s a Canadian veteran. She served overseas for our country for 6 months before she was injured and brought home. Since then, she has struggled with severe PTSD but has gotten married, had a son, started her line and written a memoir. Oh, and she’s only 30! Impressive doesn’t even begin to describe her and we couldn’t get over what a rad chick she is!

Kelsi – if you happen to be reading this – I loved meeting you and am excited to keep up with your journey!

(Check out www.brassandunity.com because it is seriously gorgeous stuff and 20% of the profits are donated back to Veteran’s assistance programs.) 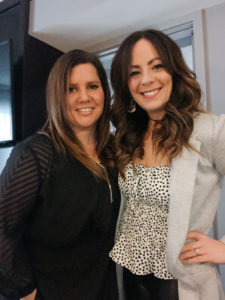 The next day, we took Tawni’s beautiful daughter out for lunch at the Cactus Club before heading back to the suite for a relaxing afternoon of getting ready for the gala. We enjoyed nice, long, hot showers, some great conversation and lots of laughs while we did our hair and makeup. We both loved our outfits and felt totally glam but so comfortable (nailed it!) and it was fun to be able to get dressed up together for a night out on the town. We took a super cute selfie, did a final mirror check and hopped in with the Matrix driver service to the convention centre.

Some people make your laugh a little louder, your smile a little brighter and your life a little better. Love you Tawn ~ xo

From the second we walked in, I could feel the excited energy of all the ladies and everyone looked so beautiful! 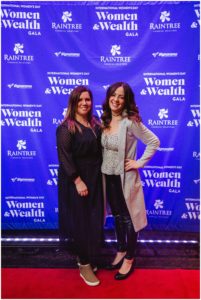 I couldn’t help but feel a bit emotional being surrounded by a room full of such intelligent and ambitious women who had chosen to invest in themselves by attending this event. Everything about the set up was flawless and I was fortunate to run into an old friend who was one of the photographers – Amara Dirks Photography so she took this awesome pic for Tawni and I.

When we made our way to the table, lucky number 7, we introduced ourselves to the ladies and settled in for the program. The dinner was delicious and the service was amazing which is always so appreciated at large events like this one. Carrie Doll was the nights emcee and as usual, she crushed it! She is such a strong, stunning and well-spoken woman and it was really cool to be so close to the stage and really get to watch her do her thing. I’ve grown up watching her and she doesn’t look like she’s aged a day!

I have a crazy amount of respect for women who can speak so confidently in public like Carrie Doll can.

Ariana Whitlow was the entertainment for the night and ladies, she SLAYED!!!

This rockstar Mom of 3 got up there and absolutely rocked out!

Tawni and I were bee-bopping in our chairs and singing along at the top of our lungs. Ariana’s performance was nothing short of amazing and she definitely got the energy in the room going for the night.

The first speaker was Courtney Buhler, a local Edmonton entrepreneur who owns a lash company called Sugar Lash PRO. Her story is unbelievably impressive and she’s accomplished so much so far in life already that you can’t help but feel inspired.

She is a testament that taking risks pays off, diversifying pays off and inspiration commands attention.

Then came the woman I had been waiting for….. Michele Romanow took the stage and I instantly zeroed in and tuned out the room around me. She co-founded Clearbanc which provides growth capital for online businesses and I have admired her for years! I have found so much inspiration and empowerment following her on social media so she was the reason I had made the effort to be there that night. She spoke about her roots and her first real business adventures and failures. She talked about how iteration – the repetition of a process – is the practice that got her where she is today.

But Michele always kept moving forward with her process and the next idea. She talked about starting at 60% instead of waiting until you feel 100% ready because we will never be 100% ready. She has such an energetic and ambitious vibe about her and also happens to be really cool. She spoke effortlessly and eloquently but I appreciated her casually dropped f-bomb and her reminder that she will not be called ‘sweetie.’

She said so many things I had been needing to hear and my heart was soaking up every word.

As the evenings program came to a close, all of the raffle draws were being announced. There was an amazing spa package that Tawni was only one number off from winning so we were bummed for her for a minute. But then, the big draw of night was being announced – a 1 year lease on a brand new Range Rover – and Tawni WON!

We jumped out of our seats! Screaming and hugging each other while she picked me up and twirled me around! Lol. I’m sure the rest of the room thought we were completely ridiculous but we just couldn’t contain our excitement!

The night had already been so amazing but once the program was done, I had a mission to complete.

I had purchased the VIP tickets specifically because they included a meet and greet with the speakers and I wasn’t going to miss the opportunity to personally meet Michele Romanow.

So we headed back to the VIP lounge, I grabbed a drink and waited patiently for the crowd to die down a bit. When I saw my chance, I swept in for the introduction. As she extended her hand to me, I just couldn’t help myself but I asked if I could give her a hug and she said yes. It sounds weird but she gave me a really, really nice hug and it immediately put me at ease with her! I then explained how much her talk meant to me that evening and that I sometimes feel uninspired and like nothing is going my way. I told her about my businesses and what my goals are. She assured me that it’s worth it and to keep going.

Then my girl Amara took a few photos for us, I gave Michele another hug and thanked her again for being such an inspiration to me. Our interaction was only a short few minutes but everything I had hoped for and she definitely left a lasting impression. 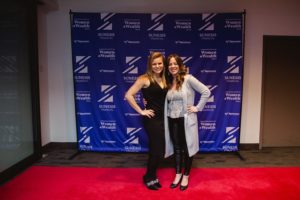 It was truly a night to remember and like I said earlier, Tawni and I were on top of the world! I had made sure to introduce myself to a few people throughout the evening so I had made some exciting new connections as well. But after meeting Michele, a brand new Range Rover for my girl and spending the night surrounded by incredible, inspiring women, I was spent!

We toyed with the idea of going out on the town but would need to go back to the hotel regardless to drop off our gift bags and change into more appropriate winter clothing. So we ordered our Uber and made our way back to the hotel where pizza and jammies became the more immediate priority.

I went to sleep that night feeling warm and fuzzy inside.

These types of events are always such great motivation and inspiration for me so I’m always grateful when I get a chance to take one in. It’s so important to invest in ourselves and do the things that give us that extra pep in our step or renewed sense of self.

Thank you Tawni for being such an awesome partner in crime this weekend! And thank you to the major sponsor, Raintree Financial, for such an amazing event!

THAT was one for the books and I’ll definitely be planning to attend again next year.

Get started in our course.

Follow us for motivation, sales tips, and course info! 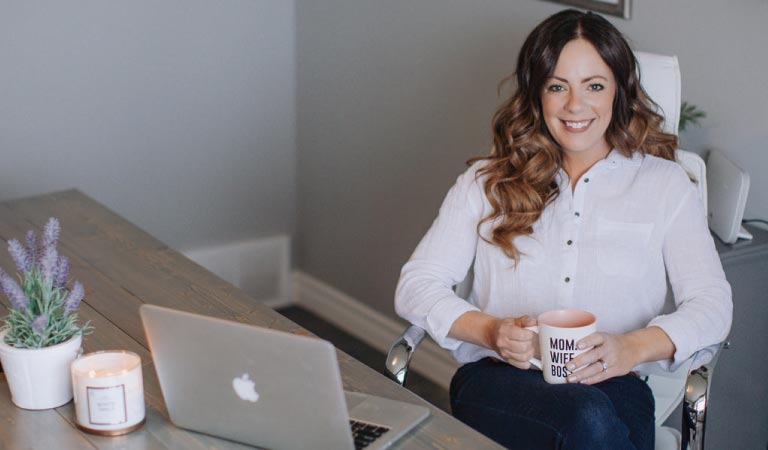